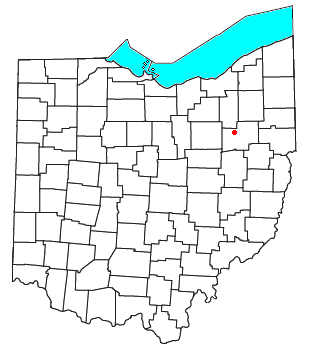 Joseph Francis Marchand, first child of Francis and Mary (Friez) Marchand, was born in Boron, France, March 15, 1825. He was three years old when he, along with his parents, immigrated to America. He married Catherine Pierson on June 6, 1847, at St. Peter's Catholic Church in Canton, Ohio. Catherine was born September 1, 1829, in Ohio. Her parents Peter and Catherine Pierson, French born, immigrated to America a month after the Marchands had arrived. Joseph was an early pioneer in Ohio and founded the village of Marchand. He was an enterprising man, being an agriculturist, businessman and investor. He purchased property when given the opportunity and erected three houses in the village of Marchand, one of which was used as a hotel and another as a saloon. He operated a small store in the third of the houses, creating competition for the general store across the street. He built a grain elevator, buying grain from farmers. A post office was opened in Marchand on December 22, 1881 and closed on October 14, 1916; mail formerly sent to the Marchand post office was redirected to the New Berlin post office, now North Canton.

All content from Kiddle encyclopedia articles (including the article images and facts) can be freely used under Attribution-ShareAlike license, unless stated otherwise. Cite this article:
Marchand, Ohio Facts for Kids. Kiddle Encyclopedia.