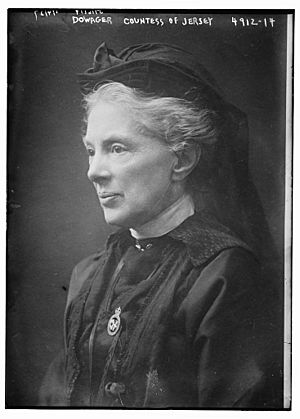 The Dowager Countess of Jersey, c.1919 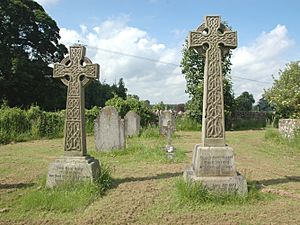 Graves of the 7th (left) and 8th (right) Earls of Jersey in All Saints' parish churchyard, Middleton Stoney, Oxfordshire - Margaret is buried with her husband.

She was the daughter and eldest child of William Henry Leigh, 2nd Baron Leigh. On 19 September 1872 she married Victor Child Villiers, 7th Earl of Jersey. They had six children:

She was the founding president (1901–14) of the Victoria League and was known as an opponent of women's suffrage. She was the author of travel articles, children's plays, verse and hymns. In 1871 the Religious Tract Society published a small collection of her hymns and poems under the title of Hymns and Poems for very Little Children. A second series under the same title appeared in 1875. Six of these hymns were included in W. R. Stevenson's School Hymnal, 1880. Some of these are also included in The Voice of Praise: for Sunday School and home (London S. S. Union) and other collections.

In 1920 she published A brief history of Osterley Park (her husband's seat) and in 1922 Fifty-One Years of Victorian Life.

In 1903, she laid the foundation stone of Brentford Library, and five years later she formally opened Hove Library.

She was appointed a Dame Commander of the Order of the British Empire in 1927. Having suffered a stroke in 1909, Lord Jersey died at Osterley Park, Middlesex, in May 1915, aged 70 - Margaret survived her husband by 30 years and died at Middleton Park, Oxfordshire, in May 1945, aged 95.

All content from Kiddle encyclopedia articles (including the article images and facts) can be freely used under Attribution-ShareAlike license, unless stated otherwise. Cite this article:
Margaret Child Villiers, Countess of Jersey Facts for Kids. Kiddle Encyclopedia.