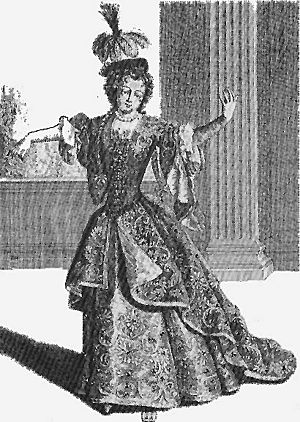 Marie-Thérèse Perdou de Subligny (1666–1735) was a French ballerina. She entered the l'Académie Royale de Musique in 1688, where she succeeded Mademoiselle de Lafontaine as prima ballerina, a position she held until 1707. She appeared mostly in opera ballets of Jean-Baptiste Lully and André Campra. She was the first professional ballerina to appear in England (1702-3). She was seen as one of the Queens of ballet.

All content from Kiddle encyclopedia articles (including the article images and facts) can be freely used under Attribution-ShareAlike license, unless stated otherwise. Cite this article:
Marie-Thérèse de Subligny Facts for Kids. Kiddle Encyclopedia.