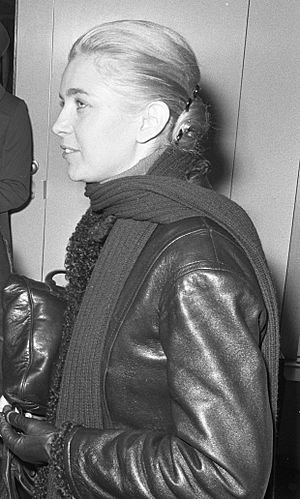 Marie Dubois (Claudine Lucie Pauline Huzé; January 12, 1937 - October 15, 2014) was a French actress. Dubois was born in Paris, France. She studied at l'École de la rue Blanche (ENSATT). She made her movie debut in 1959. She was first gaining notice as Léna in Shoot the Piano Player.

She was known for her roles in Jules and Jim, The Thief of Paris, Hot Line, La Ronde, La Grande Vadrouille, and Monte Carlo or Bust. In 1978 she won the César Award for Best Supporting Actress for her role as Dominique Montlaur in La Menace.

Dubois married French actor Serge Rousseau in 1961. They remained together until his death in 2007. Dubois died in Paris, France from multiple sclerosis, aged 77.

All content from Kiddle encyclopedia articles (including the article images and facts) can be freely used under Attribution-ShareAlike license, unless stated otherwise. Cite this article:
Marie Dubois Facts for Kids. Kiddle Encyclopedia.