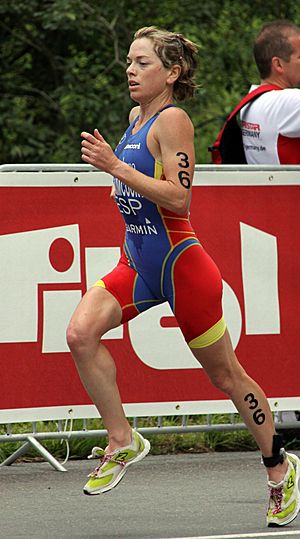 Marina Damlaimcourt at the World Championship Series triathlon in Kitzbühel, 2010.

In the eight years from 2003 to 2010, Damlaimcourt has taken part in 46 ITU elite competitions and has achieved 10 top ten positions. At her very first ITU triathlon (Schliersee) Damlaimcourt won the gold medal.

Damlaimcourt lives in Galapagar, Madrid, and in Spain she represents the club Canal de Isabel II.

Unless indicated otherwise the following competitions are triathlons and belong to the Elite category. The following list is based upon the official ITU rankings and the athlete's ITU Profile Page.

All content from Kiddle encyclopedia articles (including the article images and facts) can be freely used under Attribution-ShareAlike license, unless stated otherwise. Cite this article:
Marina Damlaimcourt Facts for Kids. Kiddle Encyclopedia.