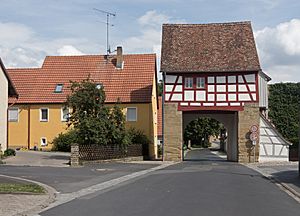 Markt Einersheim is a municipality in the district of Kitzingen in Bavaria, Germany. On April 5, 1945, at the end of World War II, the town was bombed by United States Army Air Forces P-47 Thunderbolts. American troops captured the town from German forces, who retreated to the southeast, on April 6.

All content from Kiddle encyclopedia articles (including the article images and facts) can be freely used under Attribution-ShareAlike license, unless stated otherwise. Cite this article:
Markt Einersheim Facts for Kids. Kiddle Encyclopedia.