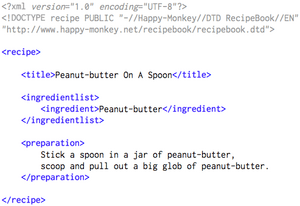 Example of RecipeBook, a simple markup language based on XML for creating recipes. The markup can be converted to HTML, PDF and Rich Text Format using a programming language or XSL.

A markup language is a computer language. It is made up of a set of instructions, and of data. It is not the same as a programming language, as only programming languages can have if statements and other conditional statements. The first markup languages were used for printing; there was the text, and there were instructions how the text should be printed. The source code is generally done in ASCII. Then there are tags. That way, LaTeX (and with that, Wikipedia), uses the instruction \mu to get the symbol

, the Greek letter "Mu". HTML uses &micro; to get the same symbol.

All content from Kiddle encyclopedia articles (including the article images and facts) can be freely used under Attribution-ShareAlike license, unless stated otherwise. Cite this article:
Markup language Facts for Kids. Kiddle Encyclopedia.