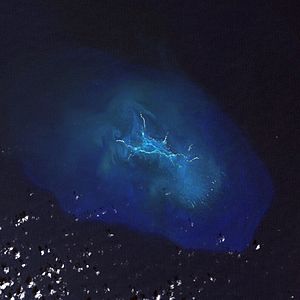 Coordinates: 25°24′54″N 170°35′24″W﻿ / ﻿25.415°N 170.590°W﻿ / 25.415; -170.590 Maro Reef (Hawaiian: Nalukākala - "surf that arrives in combers") is a largely submerged coral atoll located in the Northwestern Hawaiian Islands. It was discovered in 1820 by Captain Joseph Allen of the ship Maro, after whose ship the reef was named. With a total area of 747 square miles (1,935 km2), it is the largest coral reef in the Northwestern Hawaiian Islands. It contains 37 species of stony coral. Unlike most atolls, the coral extends out from the center like spokes on a wheel. Located about 850 miles (740 nmi; 1,370 km) northwest of Honolulu, Hawaii, Maro Reef contains about 1 acre (4,000 m2) of dry land which itself can be submerged depending on the tides. Some scientists believe that it "may be on the verge of drowning" because the reefs are detached and are vulnerable to strong storm waves.

USNS Mission San Miguel (T-AO-129) ran aground on the reef, while running at full speed and in ballast, and sank on October 8, 1957.

Dowsett reef (also called Dowsett's rock) is to the south of Maro reef. The sailing ship McNear, a bark, sunk on Dowsett reef on May 14, 1900. The ship's occupants of 33 survived by sailing in boats to Laysan island.

All content from Kiddle encyclopedia articles (including the article images and facts) can be freely used under Attribution-ShareAlike license, unless stated otherwise. Cite this article:
Maro Reef Facts for Kids. Kiddle Encyclopedia.