The Maryborough Military & Colonial Museum is a non-profit museum located at 106 Wharf Street, Maryborough, Queensland, Australia. It was established and is operated by John and Else Meyers for the benefit of the Fraser Coast community. 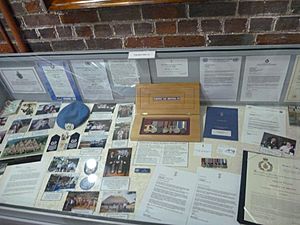 The museum has the largest number of Victoria Crosses in a private museum collection in Australia. The museum also has the only Cross of Valour (Australia) medal on public display; the one awarded to Timothy Britten following the 2002 Bali bombings.

The museum has the only surviving three-wheeler Girling car, originally built in London in 1911.

The museum occupies the former J. E. Brown warehouse, which is listed on the Queensland Heritage Register.

All content from Kiddle encyclopedia articles (including the article images and facts) can be freely used under Attribution-ShareAlike license, unless stated otherwise. Cite this article:
Maryborough Military and Colonial Museum Facts for Kids. Kiddle Encyclopedia.