The name of the river comes from the muskellunge ("Esox masquinongy"), a species of pike from North America. Its name comes from the Algonquin and means "deformed pike". 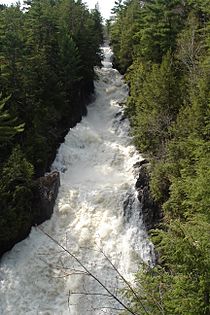 The basin was inhabited by a unit of 14,000 people in 2006. The largest urban agglomeration in the basin is the town of Saint-Gabriel, which is located on the shore of the Lac Maskinongé.

The basin is frequented by birds.

The Attikameks used the Maskinongé River as a route from Matawinie to Trois-Rivières. In 1700, French settlers began settling in Maskinongé. As for Lake Maskinongé, the first settlers settled there in 1818. The north of the basin was occupied from 1880 by the club Mastigouche, a private club of hunting and fishing. This was nationalized in the 1970s and integrated into the Mastigouche Wildlife Reserve and the Nymphs' Nest.

All content from Kiddle encyclopedia articles (including the article images and facts) can be freely used under Attribution-ShareAlike license, unless stated otherwise. Cite this article:
Maskinongé River Facts for Kids. Kiddle Encyclopedia.