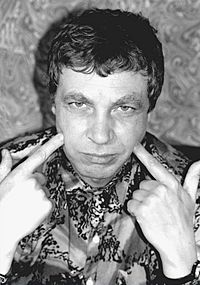 Mattioli began his career in 1965. He was also published in Corto Maltese and Frigidaire. In 1973 he began his works with Il Giornalino, creating the character Pinky.

In 1977, he created the underground magazine Cannibale. In 1978, Cannibale published the first adventure of Joe Galaxy. In 1982, he created the Squeak the Mouse series. His works helped inspire The Simpsons creator Matt Groening.

All content from Kiddle encyclopedia articles (including the article images and facts) can be freely used under Attribution-ShareAlike license, unless stated otherwise. Cite this article:
Massimo Mattioli Facts for Kids. Kiddle Encyclopedia.