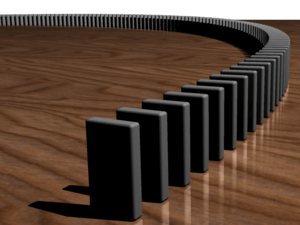 Mathematical induction can be informally illustrated by reference to the sequential effect of falling dominoes.

Mathematical induction is a special way of proving a mathematical truth. It can be used to prove that something is true for all the natural numbers (all the positive whole numbers). The idea is that

In the careful language of mathematics:

An example of proof by induction:

Prove that for all natural numbers n:

First, the statement can be written: for all natural numbers n

By induction on n,

so this is true.

Next, assume that for some n=n0 the statement is true. That is,:

Hence the proof is correct.

The initial starting value is 3, and the interior angles of a triangle is

degrees. Assume that the interior angles of a

degrees. Add on a triangle which makes the figure a

-sided polygon, and that increases the count of the angles by 180 degrees

There are a great many mathematical objects for which proofs by mathematical induction works. The technical term is a well-ordered set.

The same idea can work to define, as well as prove.

There is a set of axioms for the arithmetic of the natural numbers which is based on mathematical induction. This is called "Peano's Axioms". The undefined symbols are | and =. The axioms are

One can then define the operations of addition and multiplication and so on by mathematical induction. For example:

All content from Kiddle encyclopedia articles (including the article images and facts) can be freely used under Attribution-ShareAlike license, unless stated otherwise. Cite this article:
Mathematical induction Facts for Kids. Kiddle Encyclopedia.