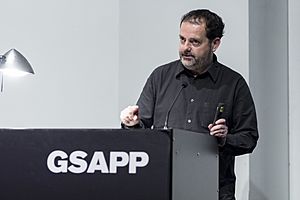 Mauricio Rocha was born in Mexico City in 1965 and studied architecture at Universidad Nacional Autónoma de México in the Max Cetto workshop. He has taught architectural language and projects at the UNAM faculty, Anahuac University and Ibero University in México City, and has given lectures at prestigious Universities in the United States and Latin America. Besides architecture he has worked as an artist doing interventions in different buildings and exhibiting at important national and international places such as Artists Space in New York. In his architectural works his most outstanding buildings are different projects realized in México City, like the “Center for the attention of blind people” in the Ixtapalapa district, “House for abandoned children” in Observatorio DF, “San Pablo Ozotepec Market” in the Milpa Alta district in DF, etc. With his first project realized in 1991 at the age of 25 (the house of his mother, the renowned Mexican photographer Graciela Iturbide) he founded “Taller de Arquitectura”, although he collaborated with his father Manuel Rocha Diaz until his death in 1996. From the fusion of the two offices, Mauricio Rocha built the foundation of a new one, generating new projects for public and private buildings all over the country. In 2012, the office was renamed Taller de Arquitectura Mauricio Rocha + Gabriela Carrillo, when he was joined by partner Gabriela Carrillo. In 2014, Graciela Iturbide commissioned Taller de Arquitectura Mauricio Rocha + Gabriela Carrillo to build a brick studio in Coyoacán, Mexico City, which was completed in 2017.

All content from Kiddle encyclopedia articles (including the article images and facts) can be freely used under Attribution-ShareAlike license, unless stated otherwise. Cite this article:
Mauricio Rocha Facts for Kids. Kiddle Encyclopedia.