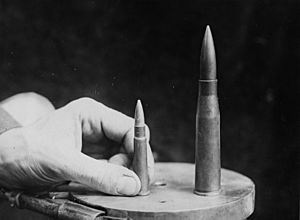 The Mauser 1918 T-Gewehr was an anti-tank rifle, of German production, used towards the end of World War I. At the Battle of the Somme, the British first used tanks. The Germans were surprised, and had no weapons (rifles) that could be used against tanks. For this reason, they developed one: The Mauser anti-tank rifle was the first rifle that was able to penetrate the larger shell of a tank. It was used towards the end of WWI. It was able to penetrate 20-25mm of tank shell, at a distance of 100 metres (330 ft).

All content from Kiddle encyclopedia articles (including the article images and facts) can be freely used under Attribution-ShareAlike license, unless stated otherwise. Cite this article:
Mauser 1918 T-Gewehr Facts for Kids. Kiddle Encyclopedia.