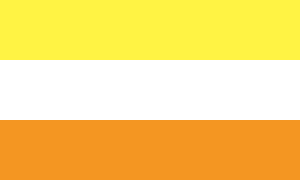 Maverique is a gender identity that is characterized by autonym towards manhood or womanhood, while having the internal conviction that it is unrelated or not derived from none of the binary genders, while this is not a genderlessness or a gender apathy nor a gender neutrality.

This identity is a non-binary gender, the flag has yellow, just as nonbinary's one, because it's a photological primary color along with blue and pink.

All content from Kiddle encyclopedia articles (including the article images and facts) can be freely used under Attribution-ShareAlike license, unless stated otherwise. Cite this article:
Maverique Facts for Kids. Kiddle Encyclopedia.