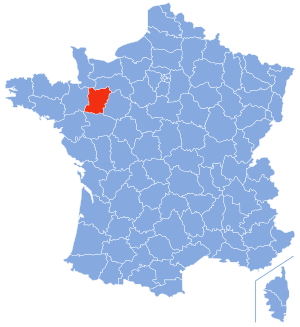 Location of Mayenne in France 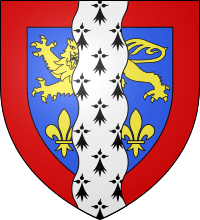 La Mayenne is a department the northwest of France. It was named after the river la Mayenne and its number is 53. It is in the region Pays de la Loire. Its population is 285,338 (1999) and its land area is 5,175 km². The population density is 55/km². It has 261 communes, its prefecture is Laval ans its subprefectures are Mayenne and Château-Gontier. The inhabitants are called the Mayennais.

All content from Kiddle encyclopedia articles (including the article images and facts) can be freely used under Attribution-ShareAlike license, unless stated otherwise. Cite this article:
Mayenne Facts for Kids. Kiddle Encyclopedia.