The land for the park was acquired by the city in 1889 and the park was open by 1891. It was originally named Winthrop Park after an assemblyman, Col. Winthrop Jones, who acquired the land for purchase and who happened to be the son of the Parks Commissioner. Jones died in 1890, shortly after the park's creation. In 1941 the park was renamed for Monsignor Edward J. McGolrick (1857-1938), the longtime pastor of nearby St. Cecilia's Roman Catholic Church. Winthrop Jones had had no children, and so left no family in Greenpoint to oppose the renaming of the park he had helped establish. 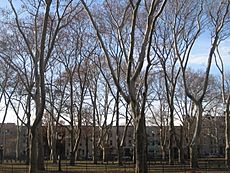 The classical brick and limestone Shelter Pavilion was built in 1910 by Helmle and Huberty. It was designated a New York City Landmark in 1966 and listed on the National Register of Historic Places in 1980. It was rehabilitated in 1985.

West of the pavilion stands a bronze winged victory figure created by Carl Augustus Heber in 1923. The monument honors the 150 residents of Greenpoint, Brooklyn who fought in World War I. The statue depicts a female allegorical figure, holding aloft a modified laurel, a symbol of victory, and in her right hand supporting a large palm frond, a symbol of peace. The granite pedestal is inscribed with the names of battle sites in France. The monument was commissioned at a cost of $7,300 by the Greenpoint Memorial Association.

The Monitor and the Merrimac is a sculpture by Antonio de Filippo, which commemorates the Battle of the Monitor and Merrimack. The USS Monitor was built nearby at the Continental Iron Works in Greenpoint and outfitted at the Brooklyn Navy Yard.

The park has often suffered from vandalism, despite several focused cleanup programs.

All content from Kiddle encyclopedia articles (including the article images and facts) can be freely used under Attribution-ShareAlike license, unless stated otherwise. Cite this article:
McGolrick Park Facts for Kids. Kiddle Encyclopedia.