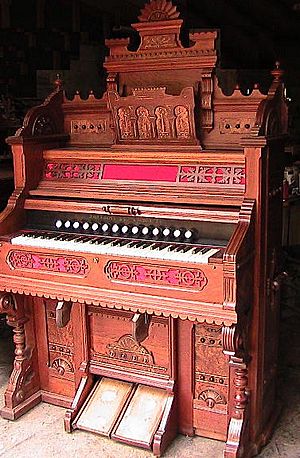 A mechanical organ is an organ that is self-playing, rather than played by a musician. For example, the barrel organ is activated either by a person turning a crank, or by clockwork driven by weights or springs.

Originally, the music for mechanical organs was stored by pins on a large barrel. Such instruments were called barrel organs. Such organs only have a very limited repertoire, both in the number of musical selections that could be stored, and the length of tune that could be accommodated.

In the 1890s, book music was invented. This meant that the length of music was no longer constrained. Being physically much smaller than a barrel for a similar instrument, it is much easier to manipulate the music, and so a greater variety of music could be played.

Rather than the book music, some instruments are operated by a music roll.

In the movie The Great Race (1965) Professor Fate, with bandaged thumbs, is shown pretending to play a mechanical organ.

All content from Kiddle encyclopedia articles (including the article images and facts) can be freely used under Attribution-ShareAlike license, unless stated otherwise. Cite this article:
Mechanical organ Facts for Kids. Kiddle Encyclopedia.