Melaleuca delta is a plant in the myrtle family, Myrtaceae and is endemic to the south-west of Western Australia. It is an erect shrub resembling Melaleuca marginata with its heads of white flowers in late spring but is distinguished from that species by the length of its style. Its species name is derived from the name for a computer software application. 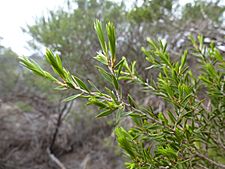 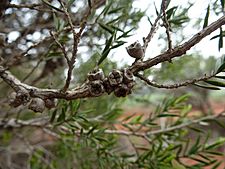 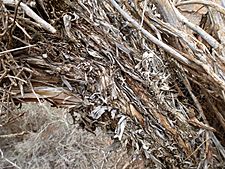 Melaleuca delta was first formally described in 1999 by Lyndley Craven from a specimen collected in the Wongan Hills. The specific epithet (delta) refers to a computer software package called DEscription Language for TAxonomy used by biologists.

This melaleuca occurs in three disjunct areas in the Kalbarri, Wongan Hills and Jurien Bay districts in the Avon Wheatbelt and Geraldton Sandplains biogeographic regions. where it grows in gravelly loam in swampy areas, including those that are affected by salt.

Melaleuca delta is listed as "not threatened" by the Government of Western Australia Department of Parks and Wildlife.

All content from Kiddle encyclopedia articles (including the article images and facts) can be freely used under Attribution-ShareAlike license, unless stated otherwise. Cite this article:
Melaleuca delta Facts for Kids. Kiddle Encyclopedia.