Melaleuca foliolosa is a plant in the myrtle family, Myrtaceae and is endemic to northern Queensland in Australia. It is distinguished by it very small leaves which are pressed against the stem and almost overlap each other.

The flowers are cream to greenish white and arranged in short spikes or almost spherical heads in the upper leaf axils. Each head contains 2 to 8 individual flowers and is up to 15 mm (0.59 in) in diameter. The petals are 1.8–2.0 mm (0.07–0.08 in) long and fall off as the flower opens. The stamens are arranged in five bundles around the flower, each bundle containing 20 to 35 stamens. Flowers appear from April to October and are followed by fruit which are woody capsules 2.5–3.5 mm (0.098–0.14 in) long. 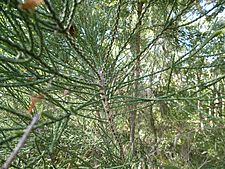 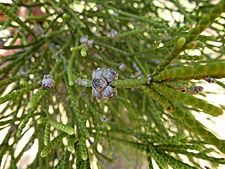 Melaleuca foliolosa was first formally described in 1866 by George Bentham in Flora Australiensis from a specimen collected by Allan Cunningham at Cape Flinders. The specific epithet (foliolosa) is from the Latin word folium meaning "leaf", hence foliolose, referring to the numerous, small leaves of this species.

This melaleuca is found throughout the Cape York Peninsula growing in woodland and savannah in sand, clay and near coastal salt pans. It forms a low shrubland on the margins of saline flats near the Annan River.

All content from Kiddle encyclopedia articles (including the article images and facts) can be freely used under Attribution-ShareAlike license, unless stated otherwise. Cite this article:
Melaleuca foliolosa Facts for Kids. Kiddle Encyclopedia.