Melaleuca incana subsp. tenella is a plant in the myrtle family Myrtaceae which is endemic to the south coast of Western Australia. It was formerly known as Melaleuca tenella Benth. but was reduced to a subspecies in 1998. It is similar to M. incana subsp. incana except in the form of the plant, the size and shape of its leaves, its flowering time and distribution.

Melaleuca incana subsp. tenella is an erect, spreading shrub, sometimes a small tree growing to a height of 5 metres (20 ft) and with thin outer branches. The leaves are in opposite pairs, sometimes rings of three, curved and crowded along the branchlets, 3.5–9 millimetres (0.1–0.4 in) long and 0.5–1.1 millimetres (0.02–0.04 in) wide, and narrow lance-shaped. The leaves and young branches are covered with fine, soft hairs giving the foliage a grey appearance. 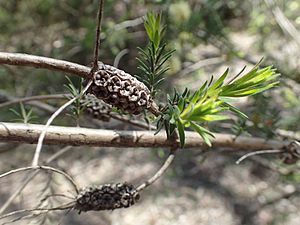 The species Melaleuca tenella had been originally described in 1867 in Flora Australiensis from a specimen collected by George Maxwell "in moist soil, tributaries of the Phillips River". In a review of the genus in 1998, Melaleuca tenella Benth. was reduced to the present subspecies. The subspecies name (tenella) is from the Latin tener meaning "soft", "delicate" or "tender", "in reference to the appearance of the type specimen of this plant".

Melaleuca incana subsp. tenella occurs near the coast of Western Australia between the Esperance district and Cape Arid in the Esperance Plains and Mallee biogeographic regions. It grows in sand in swampy sites.

All content from Kiddle encyclopedia articles (including the article images and facts) can be freely used under Attribution-ShareAlike license, unless stated otherwise. Cite this article:
Melaleuca incana subsp. tenella Facts for Kids. Kiddle Encyclopedia.