Head of flowers appear on the ends of the branches in November and December, each head composed of 4 to 12 groups of flowers, each group composed of three flowers. The heads are 18–25 mm (0.7–1 in) in diameter. The stamens are pure white, in five bundles around the flower with 6 to 12 stamens per bundle. The fruit are woody capsules 5–3.5 mm (0.2–0.1 in) long.

This species was first formally described in 2004 by Lyndley Craven, Glenn Holmes and Garry Sankowsky in Muelleria from a specimen collected 1.2 km (0.7 mi) north west of Mt Emerald. The specific epithet (uxorum) is from the Latin uxor meaning "wife", "in collective honour of Kirsty, Jenny and Nada, the wives, respectively, of each of the authors of this name, for their companionship in the field and enthusiasm for plants generally". 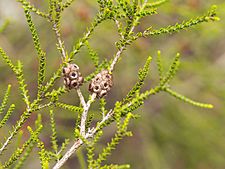 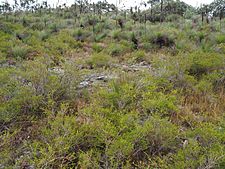 Melaleuca uxorum occurs in the northern Herberton Range on pavements of acidic volcanic rock, in association with Eucalyptus lockyeri.

Melaleuca uxorum is classified as Endangered by the Queensland Nature Conservation Act 1992.

All content from Kiddle encyclopedia articles (including the article images and facts) can be freely used under Attribution-ShareAlike license, unless stated otherwise. Cite this article:
Melaleuca uxorum Facts for Kids. Kiddle Encyclopedia.