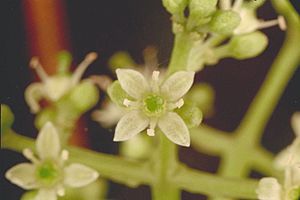 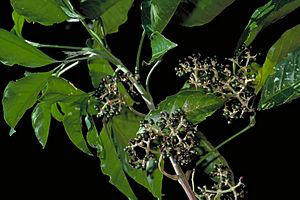 Melicope vitiflora, commonly known as northern evodia, fishpoison wood, leatherjacket or leatherwood, is a species of shrub or small tree in the family Rutaceae and is native to north-eastern Australia and New Guinea. It has trifoliate leaves and green to white or cream-coloured flowers borne in panicles in leaf axils.

Northern evodia was first described in 1871 by Ferdinand von Mueller who gave it the name Euodia vitiflora and published the description in his book, Fragmenta phytographiae Australiae from a specimen collected near Rockingham Bay by John Dallachy. In 1990, Thomas Gordon Hartley changed the name to Melicope vitiflora in the journal Telopea.

Melicope vitiflora grows in coastal and inland rainforest and is found from near sea level to an altitude of 1,200 m (3,900 ft). It occurs in New Guinea and from the McIlwraith Range on Cape York Peninsula to Broken Head in far north-eastern New South Wales.

This species is classified as of "least concern" under the Queensland Government Nature Conservation Act 1992.

All content from Kiddle encyclopedia articles (including the article images and facts) can be freely used under Attribution-ShareAlike license, unless stated otherwise. Cite this article:
Melicope vitiflora Facts for Kids. Kiddle Encyclopedia.