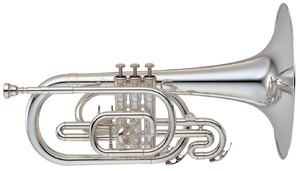 The mellophone is a medium-range instrument which typically takes the place of the French horn in marching bands. Its appearance is similar to that of a trumpet except for more tubing and a much larger bell.

All content from Kiddle encyclopedia articles (including the article images and facts) can be freely used under Attribution-ShareAlike license, unless stated otherwise. Cite this article:
Mellophone Facts for Kids. Kiddle Encyclopedia.