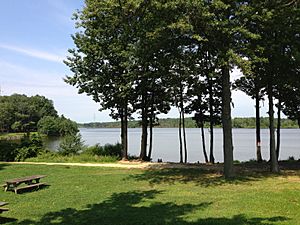 Picnic tables and walking path along the shore of Mercer Lake at Mercer County Park.

The Richard J. Coffee Mercer County Park is a recreational park located mostly within West Windsor in Mercer County, New Jersey. Originally and still more commonly known as simply Mercer County Park, it was renamed for New Jersey State Senator Richard J. Coffee on October 15, 2009. The park encompasses over 2,500 acres (10 km2) covering much of southern West Windsor, with portions extending into adjacent Hamilton and Lawrence. Mercer Lake, located within the park, is the home for the US Olympic Rowing Team's training center. The National Softball Association honored the Mercer County Park Commission with its "Outstanding Parks Award" for the softball fields and facilities in Mercer County Park. It has served as the home field for the New Jersey Pride of the Major League Lacrosse for one game in 2004, 2005 and 2006. 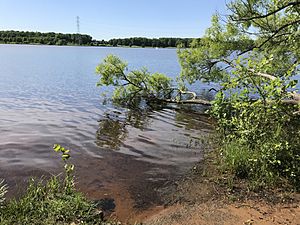 The shore of Mercer Lake. The Park's golf courses can be seen across from the lake.

The land was acquired between the late 1960s and the early 1970s. It consists of 50-plus pieces of property, which included many farms. Ground was broken for the park in June 1971. Because of the construction of Routes I-95 and I-295, the lake basin was excavated and paid for by selling gravel to the highway contractors, which in turn helped excavate the basin now known as Lake Mercer.

All content from Kiddle encyclopedia articles (including the article images and facts) can be freely used under Attribution-ShareAlike license, unless stated otherwise. Cite this article:
Mercer County Park Facts for Kids. Kiddle Encyclopedia.