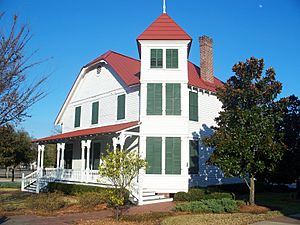 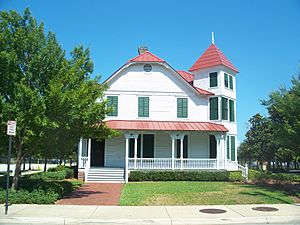 Front of the Merrill House 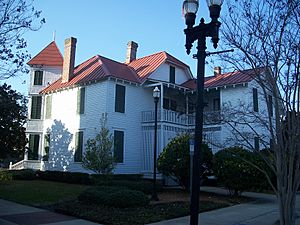 Merrill House Museum is a Victorian home operated by the Jacksonville Historical Society as a museum in Jacksonville, Florida. The home was built in 1886 at 229 Lafayette Street. It is in the Queen Anne style with Eastlake architecture features. The home was relocated and restored to 311 A. Phillip Randolph Boulevard and was moved again one block north in 2002. Renovation was completed in 2005.

The home was built for James E. Merrill who started an iron works in Jacksonville in 1875. It became Merrill-Stevens Engineering Co. by the late 1880s, one of the largest shipbuilding companies in the Southern United States. In 1886 Merrill built this house at 229 Lafayette Street, just a short walk from his iron works on East Bay Street. The house has since been moved to 317 A Philip Randolph Blvd. It exemplifies the Queen Anne style, with a square tower on the southwest corner and an elaborate vergeboard in the north gable. The porch posts, brackets, and spindles reflect the Eastlake style.

All content from Kiddle encyclopedia articles (including the article images and facts) can be freely used under Attribution-ShareAlike license, unless stated otherwise. Cite this article:
Merrill House Museum Facts for Kids. Kiddle Encyclopedia.