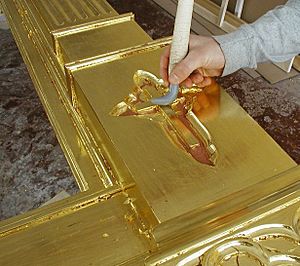 Metal leaf is a type of metallic foil used mostly for decoration. Gold leaf, a thin layering of gold foil, is the most common form of metal leaf, and the two words are often mixed up. Only very malleable metals can be made into leaf. Those metals are easily shaped, but at the same time very hard to break. Metal leaf is seen in various fields other than in decoration, sometimes used in art and gilding, its purposes in some cultures varies.

Vark is a type of silver leaf used for decoration in Indian cuisine.

Goldbeating, the technique of producing metal leaves, has been known for more than 5,000 years.

All content from Kiddle encyclopedia articles (including the article images and facts) can be freely used under Attribution-ShareAlike license, unless stated otherwise. Cite this article:
Metal leaf Facts for Kids. Kiddle Encyclopedia.