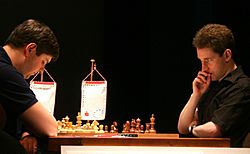 Adams won the British Chess Championship in 1989 at the age of seventeen. Making only rare appearances, he won (jointly) in 1997, and won again in 2010 and 2011. A fine score of 6½/7 in the 2011 European Club Championship marked a return to form, but his results are no longer so consistent as they used to be.

All content from Kiddle encyclopedia articles (including the article images and facts) can be freely used under Attribution-ShareAlike license, unless stated otherwise. Cite this article:
Michael Adams Facts for Kids. Kiddle Encyclopedia.