According to information from Coimbra, he started drawing in his childhood, his special interest in games and the fantasy theme was aroused through the trading card game Magic: The Gathering. Coimbra moved to Lyon in 2005 and worked as a graphic designer for the resident video game developer Eden Games, on among other things, the titles Test Drive Unlimited and Alone in the Dark.

Since 2006, Coimbra is mainly active as an illustrator for board games and card games. His better-known works include the board games Small World and Cyclades and the 7 Wonders card game. He has also done illustrations for trading card games, including the World of Warcraft Trading Card Game and Star Wars Galaxies. In addition, Coimbra also illustrated several book covers and concept art for computer games. 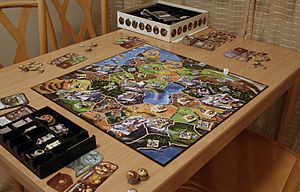 One of the illustrated Coimbra games: Small World.

All content from Kiddle encyclopedia articles (including the article images and facts) can be freely used under Attribution-ShareAlike license, unless stated otherwise. Cite this article:
Miguel Coimbra Facts for Kids. Kiddle Encyclopedia.