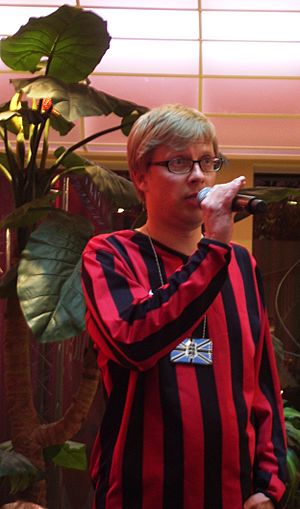 Mika Keränen (born 24 November 1973 in Helsinki) is a Finnish-Estonian children's writer, poet and translator. He is best known for his series of Estonian-language crime stories, which are addressed to children. The settings of these stories take place in the Supilinn neighborhood of Tartu.

In 1999, he graduated from University of Tartu, studying the Estonian language as a foreign language. From 2002 to 2006, he was the director of the Estonian Institute in Finland. Since 2006, he returned to Estonia and is living and working in Tartu.

All content from Kiddle encyclopedia articles (including the article images and facts) can be freely used under Attribution-ShareAlike license, unless stated otherwise. Cite this article:
Mika Keränen Facts for Kids. Kiddle Encyclopedia.