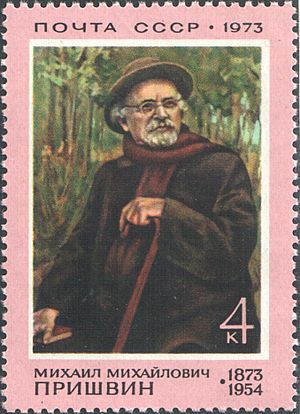 Mikhail Prishvin was born in the family mansion of Krutschevo in Oryol Governorate (now in Stanovlyansky District, Lipetsk Oblast) into the family of a merchant. In 1893-1897, he studied at a polytechnic school in Riga and was once arrested for his involvement with Marxist circles. In 1902, Prishvin graduated from the University of Leipzig with a degree in agronomics. During World War I, he worked as a military journalist. After the war, Prishvin was employed as a publicist and then a rural teacher.

He began writing for magazines in 1898, but his first short story, "Sashok," was published in 1906. Prishvin's works are full of poetics, exceptional keenness of observation, and descriptions of nature. Many of his works were translated into different languages and became part of the gold fund of the Soviet children's literature. Mikhail Prishvin was awarded two orders.

All content from Kiddle encyclopedia articles (including the article images and facts) can be freely used under Attribution-ShareAlike license, unless stated otherwise. Cite this article:
Mikhail Prishvin Facts for Kids. Kiddle Encyclopedia.