Millard House, also known as La Miniatura, is a textile block house designed by Frank Lloyd Wright and built in 1923 in Pasadena, California. It was listed on the National Register of Historic Places in 1976. 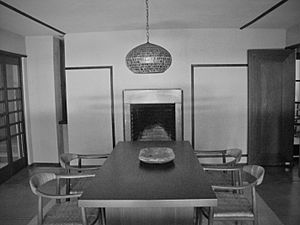 The Millard House was the first of Frank Lloyd Wright's four "textile block" houses — all built in Los Angeles County in 1923 and 1924. Wright took on the Millard House following his completion of the Hollyhock House in Hollywood and the Imperial Hotel in Japan.

By this time, Wright felt typecast as the Prairie house architect and sought to broaden his architectural vision. Wright turned to the concrete block as his new building material. Wright wrote in his autobiography that he chose to build with concrete blocks as they were "the cheapest (and ugliest) thing in the building world," and he wanted to see "what could be done with that gutter-rat." The textile-block houses were named for their richly textured brocade-like concrete walls. The style was an experiment by Wright in modular housing; he sought to develop an inexpensive and simple method of construction that would enable ordinary people to build their own homes with stacked blocks. By adding ornamental designs to mass-produced blocks, Wright hoped the blocks could become a "masonry fabric capable of great variety in architectural beauty." Writer Hugh Hart described Wright's concept this way: "By unifying decoration and function, exterior and interior, earth and sky — perforated blocks served as skylights — Wright saw his Textile Block Method approach as an utterly modern, and democratic, expression of his organic architecture ideal." 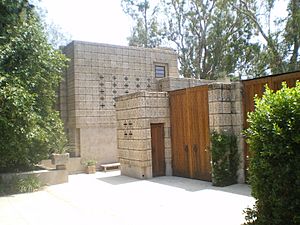 View from the street

Wright was commissioned to build Millard House by Alice Millard, a rare-book dealer for whom Wright had built a home in Highland Park, Illinois in 1906. Seeking to integrate the Millard House with the land, Wright designed the home to cling to the lot's steep ravine, nestled it among the trees, and fabricated the home's concrete blocks using sand, gravel and minerals found on the property. By using roughly textured, earth-toned blocks, he sought to blend the house with the color and form of the trees and hillside. While the design was in most ways a departure from Wright's prior work, it was consistent with his lifelong love of natural materials and his belief that buildings should complement their surroundings. He later said that Millard House "belonged to the ground on which it stood."

The blocks were created in wooden molds with patterns on the outside and smooth on the inside. The blocks feature a symmetrical pattern of a cross with a square in each corner. Wright reinforced the blocks using conventional mortar. The project cost $17,000 — 70% more than the $10,000 budget Millard had given to Wright. Some accounts state that the builder walked off the job, "leaving Wright to finish the project himself, out of his own pocket".

The 2,400-square-foot (220 m2) house consists of a vertical three-story block. The first floor has the kitchen, servant's room and a dining room opening onto a terrace with a reflecting pool. The second floor has the main entrance, guest room, and a two-story living room with a fireplace and balcony. The third floor contained Millard's bedroom with a balcony overlooking the living room and outdoor terrace.

Like many of Wright's homes, Millard House suffered from leaks during rains. After the house flooded in a storm, Millard wrote a letter to Wright complaining about the inadequate storm drain that resulted in the basement filling entirely with muddy water and the water rising to six inches (152 mm) in the dining room.

All content from Kiddle encyclopedia articles (including the article images and facts) can be freely used under Attribution-ShareAlike license, unless stated otherwise. Cite this article:
Millard House Facts for Kids. Kiddle Encyclopedia.