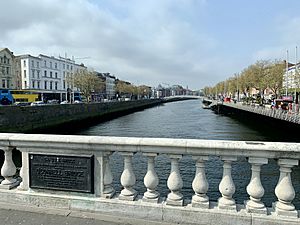 On the right side a plaque is visible in the stone balustrade commemorating the fictitious "Father Pat Noise". This fictitious plaque was placed in the space left by a postcard dispensing machine temporarily installed as part of the Millennium Clock installation and would have overlooked the clock under the waters surface.

Coordinates: 53°20′50″N 6°15′35″W﻿ / ﻿53.347171°N 6.259616°W﻿ / 53.347171; -6.259616 The Millennium Clock was a six-ton installation designed by Grainne Hassett and Vincent Ducatez to celebrate the passing of the millennium, sponsored by the National Lottery. It took the form of a digital seven-segment display counting down the number of seconds to the year 2000 submerged under the surface of the River Liffey on the west side of O'Connell Bridge in Dublin city centre. It was turned on in March 1996 but suffered from technical problems, including becoming obscured by mud. It was ultimately removed in August of the same year.

A ceremony featuring a fireworks display and led by the then Minister for Finance Ruairi Quinn marking the switching on of the clock was broadcast on RTE's The Late Late Show on Friday, 15 March 1996. It was temporarily removed three days later to facilitate boat races. The clock cost £250,000 to construct, with an additional £58,000 spent on repairs, installation and removal. The clock was finally removed in August for the annual Liffey swim and was not returned.

Fictitious "Father Pat Noise" plaque placed in the location of the removed postcard dispensing machine for the Millennium Clock on O'Connell Bridge in Dublin city centre.

A postcard dispenser machine was installed on the bridge as part of the installation which printed the number of seconds to the millennium on a postcard at a cost of 20p. It sold between 600-700 postcards per day in the five months of operation generating £17,000.

The removal of the clock left a space in the bridge parapet where its control box had been. In 2004, pranksters took advantage of the space by installing a commemorative plaque memorialising the totally fictitious "Father Pat Noise".

All content from Kiddle encyclopedia articles (including the article images and facts) can be freely used under Attribution-ShareAlike license, unless stated otherwise. Cite this article:
Millennium Clock, Dublin Facts for Kids. Kiddle Encyclopedia.