Milton Terrace is a heritage-listed series of terrace houses located at 1-19 Lower Fort Street, in the inner city Sydney suburb of Millers Point in the City of Sydney local government area of New South Wales, Australia. It was built from 1880 to 1882. The property was added to the New South Wales State Heritage Register on 2 April 1999.

Millers Point is one of the earliest areas of European settlement in Australia, and a focus for maritime activities. This building is one of a group of ten very grand three storey Victorian terraces built during the 1880s. First tenanted by the NSW Department of Housing in 1984. 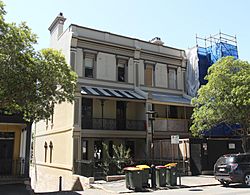 Each allotment contains a four-storey residence (including basement) with front (to the east) and rear (to the west) gardens. Each terrace is accessed via an entry walkway leading from the Lower Fort Street (footpath) across the front area and front gardens. Each had two pedestrian gates, located along the front boundary and within the front gardens - these are original and should be maintained or (when missing or damaged) reconstructed/replaced. Each terrace houe is fenced separately with iron balustrade fencing to the front gardens and timber paling fencing to the rear gardens. A c. 1900 photograph shows the garden setting (front) to the individual houses. By this date, many functioned as boarding houes and yet signs of middle class gentility remain. Also to the rear of a number of the allotments are located outbuildings and sheds of varying construction dates, typically used as additional storage space and laundry facilities. Some substantial trees exist within the rear gardens of the terraces, most notably in the rear of no's 1, 17 & 19 Lower Fort Street. The front gardens consist of a mix of tree and shrub plantings with little consistency in form or species selection between the individual terraces.

As at 12 January 2004, this group of terraces is historically significant as:

It is of aesthetic significance as:

The group is of aesthetic value as a streetscape element, being an outstanding and largely intact group facing Dawes Park with spectacular harbour views to the east. With a slight change in orientation from the terraces further up the street, Milton Terrace creates a strong and handsome termination to the extraordinary collection of 19th century housing forms that make up the western side of Lower Fort Street.

All content from Kiddle encyclopedia articles (including the article images and facts) can be freely used under Attribution-ShareAlike license, unless stated otherwise. Cite this article:
Milton Terrace Facts for Kids. Kiddle Encyclopedia.