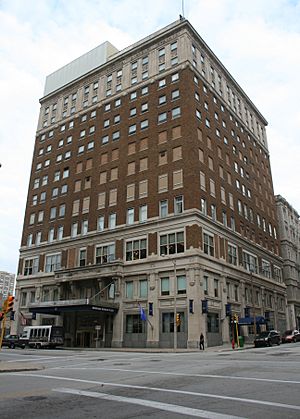 The Milwaukee Athletic Club (often referred to as the MAC), is Milwaukee's only private social and full-service athletic club. It was once known as Milwaukee's premier destination for social, networking and athletics. In 2018, a plan was made to redevelop the building and re-energize the building and restore its reputation. A $61 million investment is underway which will offer premium social, business and athletics gathering spot with 54 high-end apartments featuring best-in-class amenities. The redesign will also open the ground floor to street level to be more welcoming to club members, guests, residents and the public.

The building’s new apartments will be a mix of one, two and three-bedroom units located on the top five floors, offering high-end finishes and unique floor plans that reflect the historic building.

This project stands as the second largest development to be financed with State of Wisconsin historic preservation tax credits.

The club is headquartered at 758 North Broadway, at the corner of East Mason Street.

Amenities for MAC members starting in 2021 include:

●      Expanded work out facilities featuring the latest work out equipment

On the club's facade is a noted limestone sculpture, "Diana," installed in 1954. The building was listed on the National Register of Historic Places in 2019.

Eight young men founded the Milwaukee Athletic Club on September 18, 1882, for the express purpose of "developing of the bodily powers through gymnastic and other exercises." Soon thereafter, the MAC joined the Amateur Athletic Union (AAU); members participated in several early Summer Olympics, including the 1904 Summer Olympics held in St. Louis, where its tug of war team won the gold medal. As part of the AAU, the MAC formed basketball, swimming, track, baseball, and other teams, which competed throughout the United States.

The MAC was housed in nine different buildings before establishing its present clubhouse in 1917. In that year the club constructed the 12-story (13?) building, designed by Armand Koch with its exterior in Neoclassical style, resembling a column with the bottom three stories (the column's base) sheathed in stone veneer, the middle stories plain brick, and the top two in stone veneer - the column's capital. Beneath the veneer is a steel skeleton. In 1954 a renovation of the interior was designed by Eschweiler & Eschweiler, adding the Bali Room, the Men's Lounge, and the Elephant Room.

All content from Kiddle encyclopedia articles (including the article images and facts) can be freely used under Attribution-ShareAlike license, unless stated otherwise. Cite this article:
Milwaukee Athletic Club Facts for Kids. Kiddle Encyclopedia.