Mirima National Park also commonly known as Hidden Valley National Park is a National Park in far northern Western Australia located at the eastern side of the Kimberley region. It is located approximately 2,220 kilometres (1,379 mi) from Perth just outside the township of Kununurra. 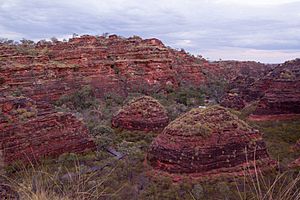 Unusual sandstone formations dominate the park and are often compared to the Bungle Bungles.

The area is of great significance to the local indigenous peoples, the Miriuwung, and several examples of rock art can be found within the park.

Access to the park is via a sealed bitumen road and an entry fee to the park applies. Camping and fires within the park are not permitted. Facilities include toilets, tables, information shelters and three walk trails around the park.

All content from Kiddle encyclopedia articles (including the article images and facts) can be freely used under Attribution-ShareAlike license, unless stated otherwise. Cite this article:
Mirima National Park Facts for Kids. Kiddle Encyclopedia.