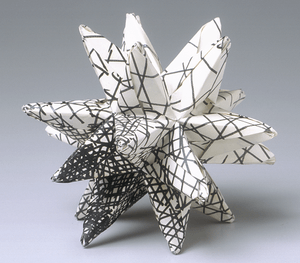 An example of modular origami

The first modular origami model comes from a 1734 Japanese book by Hayato Ohoka called Ranma Zushiki. The book has pictures of many traditional origami models, and one is a modular cube called tamatebako. Tamatebako is a Japanese word meaning "magic treasure box", and it is called this because the box can be opened on any side. Another traditional model, kusudamas, are balls of folded paper flowers. They are often hung as decorations using string or thread.

The various number of modules is combined from two to tens of thousands modules. When modules are put together, most are supported only by the friction of paper, also they are glued together or sewn by threads.

Mitsunobu Sonobe designed in 1970s. It is so simple that most people can make kusudamas. Module of Sonobe method is one of the most famous modules. We can make a polyhedron like a cube or a trisoctahedron(a dodecahedron?) by putting together many modules.

All content from Kiddle encyclopedia articles (including the article images and facts) can be freely used under Attribution-ShareAlike license, unless stated otherwise. Cite this article:
Modular origami Facts for Kids. Kiddle Encyclopedia.