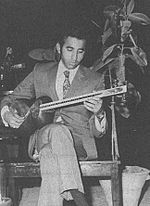 He served as the director of the Center for the Preservation and Propagation of Traditional Persian Music and the "Chavosh" Center.

In 1984 Lotfi was invited by Fondazione Cini to perform in a ceremony and perform concerts in Italy. He lived in the United States from 1986 until his death. He performed widely throughout Asia, Europe, and North America.

All content from Kiddle encyclopedia articles (including the article images and facts) can be freely used under Attribution-ShareAlike license, unless stated otherwise. Cite this article:
Mohammad-Reza Lotfi Facts for Kids. Kiddle Encyclopedia.