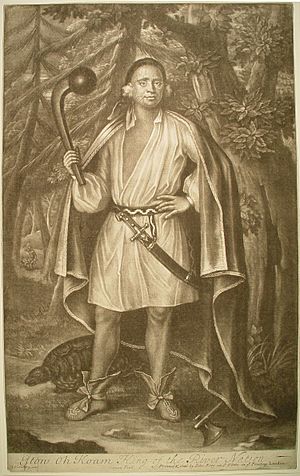 The Mahican chief Etow Oh Koam, referred to as one of the Four Mohawk Kings in a state visit to Queen Anne in 1710. By John Simon, c1750.

The Mahicans (also Mohicans) are a Native American tribe, who originally settled around the Hudson River. Many then moved to Massachusetts after 1780, before the remaining descendants moved to northeastern Wisconsin during the 1820s and 1830s. The tribe's name for itself was Muhhekunneuw, or "People of the River."

All content from Kiddle encyclopedia articles (including the article images and facts) can be freely used under Attribution-ShareAlike license, unless stated otherwise. Cite this article:
Mohican Facts for Kids. Kiddle Encyclopedia.