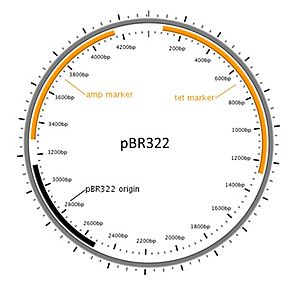 Diagram of a commonly used cloning plasmid; pBR322. It's a circular piece of DNA 4361 bases long. Two antibiotic resistance genes are present, conferring resistance to ampicillin and tetracycline, and an origin of replication that the host uses to replicate the DNA. 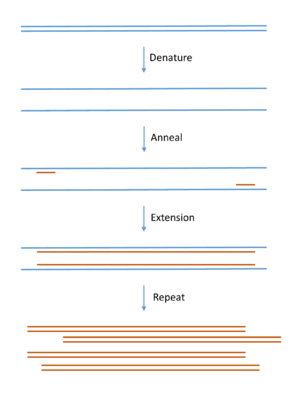 DNA for cloning is most commonly produced using PCR. Template DNA is mixed with bases (the building blocks of DNA), primers (short pieces of complementary single stranded DNA) and a DNA polymerase enzyme that builds the DNA chain. The mix goes through cycles of heating and cooling to produce large quantities of copied DNA.

Molecular cloning generally uses DNA sequences from two different organisms: the species that is the source of the DNA to be cloned, and the species that will serve as the living host for multiplying (replicating) the recombinant DNA.

In a molecular cloning experiment, the DNA to be cloned is got from an organism of interest, then treated with enzymes in the test tube to get smaller DNA fragments. These fragments are then joined with vector DNA to produce recombinant DNA molecules. The recombinant DNA is then introduced into a host organism (typically an easy-to-grow, benign, laboratory strain of E. coli bacteria). This produces a population of organisms in which recombinant DNA molecules are replicated along with the host DNA. Because they contain foreign DNA fragments, these are "transgenic" or genetically-modified microorganisms (GMO).

The idea of using molecular cloning to produce recombinant DNA was invented by Paul Berg, who won the Nobel Prize in Chemistry for 1980, jointly with Walter Gilbert and Fred Sanger.

All content from Kiddle encyclopedia articles (including the article images and facts) can be freely used under Attribution-ShareAlike license, unless stated otherwise. Cite this article:
Molecular cloning Facts for Kids. Kiddle Encyclopedia.