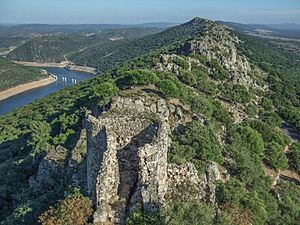 Monfragüe is a comarca (country, with no administrative role) of Extremadura, western Spain. It contains one of the country's fifteen National Parks, Parque Nacional Monfragüe.

Since 1979, the area has been protected as a natural park.

All content from Kiddle encyclopedia articles (including the article images and facts) can be freely used under Attribution-ShareAlike license, unless stated otherwise. Cite this article:
Monfragüe Facts for Kids. Kiddle Encyclopedia.