The Montauk Building - also referred to as Montauk Block - was a high-rise building in Chicago, Illinois. 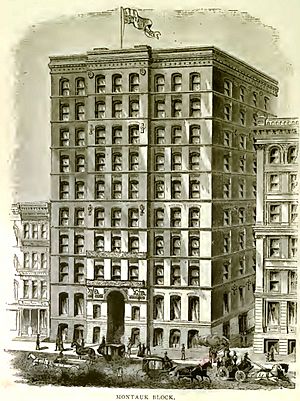 Illustration of Montauk block, circa 1886. Originally published in Andreas' History of Chicago.

Designed by John Wellborn Root Sr. and Daniel Burnham, it was built in 1882–1883, and was demolished in 1902. According to Thomas Tallmadge, "What Chartres was to the Gothic cathedral, the Montauk Block was to the high commercial building".

In his non-fiction book set at the World's Columbian Exposition, The Devil in the White City (2003), author Erik Larson claims that the Montauk became the first building to be called a "skyscraper" (Larson 2003: 29).

From 1903-1965, the First National Bank Building occupied the site. In 1965, this was demolished to make way for First National Plaza (now called Chase Tower).

All content from Kiddle encyclopedia articles (including the article images and facts) can be freely used under Attribution-ShareAlike license, unless stated otherwise. Cite this article:
Montauk Building Facts for Kids. Kiddle Encyclopedia.