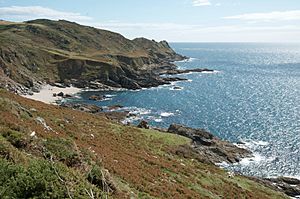 The remains of a wreck carrying cargo of Middle Bronze Age weapons was found in 1977 off Moor Sand, Gammon Head, South Hams, Devon, England. The site was designated under the Protection of Wrecks Act on 14 February 1978. The wreck is a Protected Wreck managed by Historic England

The site may represent the wreck of a prehistoric boat that sunk while carrying Middle Bronze Age weaponry including swords, palstaves, and other materials.

The site was identified in 1977 by trainee divers on a training course in Salcombe. Systematic searches in the following years identified further materials. The last artefact was recovered in 1982.

All content from Kiddle encyclopedia articles (including the article images and facts) can be freely used under Attribution-ShareAlike license, unless stated otherwise. Cite this article:
Moor Sand site Facts for Kids. Kiddle Encyclopedia.