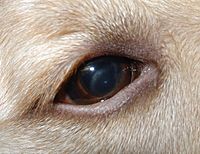 Morgan thought that when animal behaviour is described, it should not be described in human terms.

Morgan's canon is a rule relating to animal behaviour, which states that it should be explained as simply as possible. It is named after British psychologist C. Lloyd Morgan. His idea was that people should only consider behaviour as, for example, rational, purposive or affectionate, if there is no other explanation possible.

Morgan saw that much insight and apparent problem-solving behaviour could be described using trial and error learning. A famous example is the skilful way in which Morgan's terrier Tony opened the garden gate, easily taken by someone seeing the final behaviour as an insightful act. Morgan, however, had watched and recorded the series of approximations by which the dog had gradually learned the response, and could demonstrate that no insight was required to explain it.

Morgan's Canon is a forerunner of behaviourism.

All content from Kiddle encyclopedia articles (including the article images and facts) can be freely used under Attribution-ShareAlike license, unless stated otherwise. Cite this article:
Morgan's canon Facts for Kids. Kiddle Encyclopedia.