Morné Steyn (born 11 July 1984, in Cape Town) is a South African rugby union player who plays at the Flyhalf position. He plays at number 10 for the Springboks internationally, as well as for Vodacom Bulls in the Super Rugby competition.

He previously played Top 14 for the Stade Francais and the Vodacom Bulls, and was a member of the team that won the 2007, 2009 and 2010 Super Rugby competitions, ending both the 2009 and 2010 seasons as the leading point scorer and setting a record of 4 drop goals in one single match, in the 2009 semi-final against the Crusaders.

In May 2013 it was announced that he would join the French Top 14 club, Stade Français. He made his début on Friday 30 August 2013 in a 38 - 3 victory against Biarritz Olympique. Coming on in the 60th minute, he scored 4 points by converting two tries. 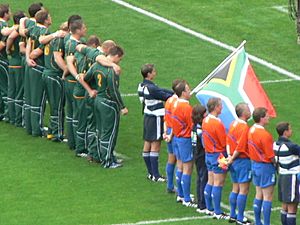 During early 2009, Springbok coach Peter de Villiers made no secret of preferring Ruan Pienaar in the Springbok number 10 jersey despite Steyn performing very well in the Super 14 tournament. Steyn was on the replacement bench during the second Test of the 2009 British & Irish Lions tour to South Africa, when Pienaar's kicking game disintegrated. Steyn made a huge impression when he replaced Pienaar and immediately slotted two conversions and two penalties – including one from 53 metres (58 yd) in the dying minutes of the game, which gave the Springboks the match and the series in dramatic fashion. On 1 August 2009 the Springboks won their match versus New Zealand in the 2009 Tri Nations Series in Durban with a score of 31–19. Steyn scored all of South Africa's 31 points (8 penalty kicks and a converted try). This broke quite a few records, amongst them the record for the most points by an individual in a Tri Nations match – previously held by Andrew Mehrtens with his score of 29 against Australia in 1999 (One conversion and nine penalties). During this match Steyn also had one drop goal attempt come off the upright and pushed one more penalty wide of the posts. This was while earning his fifth Test cap and only his second start for the Springboks.

Morne Steyn scored the most points by an individual player in the 2011 Rugby World Cup, where he procured 62 points.

All content from Kiddle encyclopedia articles (including the article images and facts) can be freely used under Attribution-ShareAlike license, unless stated otherwise. Cite this article:
Morné Steyn Facts for Kids. Kiddle Encyclopedia.