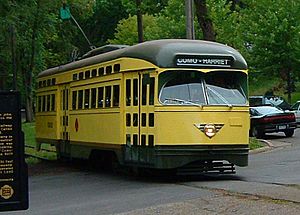 Morningside is an old streetcar suburb adjoining the Linden Hills neighborhood of the U.S. city of Minneapolis. Morningside was once a separate village, but is now a geographically and architecturally distinct neighborhood in the city of Edina.

Morningside is situated along the old Como-Harriet Streetcar Line and developed more quickly than the mostly rural village of Edina. In 1920, Morningsiders voted to secede from Edina and form their own village to provide amenities more suitable to a professional streetcar suburb. 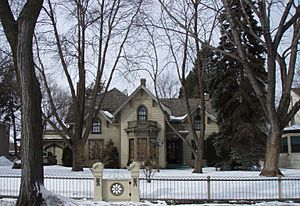 Morningside’s residential landscape reflects several of the important broad themes in the pattern of suburban development in the Twin Cities area: the relatively high-density of people per square mile within the platted subdivisions, the architectural similarly of the houses and the dependence upon mass-transit. Between about 1905 and 1936, Morningside developers built several hundred new single–family homes, including many bungalows, on standard-sized suburban lots along straight-line streets, replacing land previously occupied by farm fields and orchards.

The Morningside neighborhood was platted for residential development in 1905 by the children of Jonathan Grimes, who had inherited the Grimes farm and apple orchard in the Northeast corner of the village. Grimes Avenue bisects the neighborhood in a North-South orientation. The Jonathan Taylor Grimes House on West 44th Street was added to the National Register of Historic Places in 1976.

One of the early familiar figures in the village was George Weber. In 1929, the Morningside Mayor asked the school janitor, 55-year-old George Weber, if he would serve as the village marshal. He initially declined the job offer, but the council voted him in anyway. Weber served Morningside for the next 27 years. In 1956, with Weber’s retirement, the Edina Village Police began providing police protection to the Village of Morningside. Police headquarters for Morningside was at Weber’s home, 4400 Branson Street, and run by his wife. His duties also included the water meter reader and census taker. Court was held in the Edina Grange Hall on the first and third Monday evenings. A park in the Morningside neighborhood is named after Weber.

Morningside remained a separate village (the smallest in Minnesota) for 46 years, until 1966, when, in response to state prompting, it was reincorporated into the larger City of Edina. At least partly due to the impracticalities of building a sewage infrastructure for such a small municipality, Morningsiders voted to rejoin Edina. Yet, vestiges of Morningside's previous autonomy are still evident in the 55416 Zip Code that it shares with adjacent Minneapolis and St. Louis Park, in the water system which is connected to the City of Minneapolis water department, and in the charming village-within-a-city atmosphere that remains.

Though the neighborhood is part of Edina, part of its distinction is the independent nature of this area that has roughly 750 homes. That independence is created in part by the cohesive relationships within the neighborhood that are developed through many event and organizations that are endemic to the neighborhood. The Morningside Babysitting Cooperative has existed for nearly a century and still tracks shared hours of child care among its members. The Morningside Woman's Club was organized in 1937; it was previously known as the Morningside Literary Club. The area has an active Neighborhood Association that provides for a voice at City Hall to look after the unique needs and values of Morningside. A Morningside men's group called, the Morningside Athletic Club (MAC), meets every Saturday morning at Weber Park for sports activity, such as soccer, football and ice boot hockey.

All content from Kiddle encyclopedia articles (including the article images and facts) can be freely used under Attribution-ShareAlike license, unless stated otherwise. Cite this article:
Morningside, Minnesota Facts for Kids. Kiddle Encyclopedia.