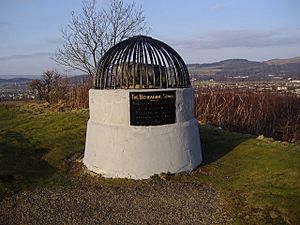 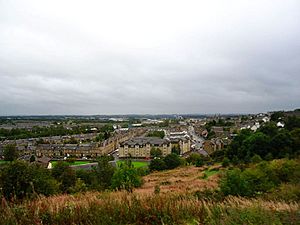 Mote Hill, Stirling is the Northern tip of the Gowanhills, Stirling, the northern half of the Royal Park that extends around Stirling Castle. The wider Park includes The Kings Knott, and sections of 2m high deer wall, first established in the 12th century.

10,000 years ago Mote Hill was a promontory projecting into a lost prehistoric sea. On the opposite bank of the Forth lies Abbey Craig, upon which sits the National Wallace Monument. These two rocky outcrops were for thousands of years the lowest crossing point of the Forth.

Mote Hill is also known as Heiding Hill or Murdoch's Knowe and is the location of the Beheading Stone, the traditional execution block for medieval Stirling. The stone itself is now on a concrete mount and under an iron cage, but you can still see the axe marks from the executions.

Mote Hill is also the site of vitrified fort, destroyed by fire in the first half of the first millennium AD. This date was confirmed by excavation by Murray Cook Stirling Council's Archaeologist.

All content from Kiddle encyclopedia articles (including the article images and facts) can be freely used under Attribution-ShareAlike license, unless stated otherwise. Cite this article:
Mote Hill, Stirling, Scotland Facts for Kids. Kiddle Encyclopedia.