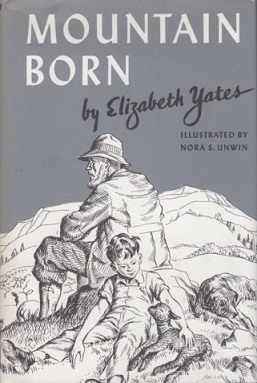 Mountain Born is a children's historical novel by Elizabeth Yates. Set in the sparsely populated Rocky Mountains during the 19th century, it describes the life of a shepherd's family. The novel, illustrated by Nora Spicer Unwin, was first published in 1943 by Coward-McCann and was a Newbery Honor recipient in 1944. In 1972 a movie based on the book was broadcast on 'The Wonderful World of Disney'. Shot in Telluride, Colorado, it starred Sam Austin as the shepherd boy.

All content from Kiddle encyclopedia articles (including the article images and facts) can be freely used under Attribution-ShareAlike license, unless stated otherwise. Cite this article:
Mountain Born Facts for Kids. Kiddle Encyclopedia.