Mt. Olympus Water and Theme Park is a theme park and water park resort complex in Wisconsin Dells, Wisconsin. The resort is themed after Ancient Greece, particularly its mythology and gods, and is named after the mountain in Greece where those gods were said to live. Mt. Olympus features an indoor and outdoor water park and amusement park rides, and the complex includes dozens of motel buildings that were acquired by the resort in addition to its purpose-built hotel. 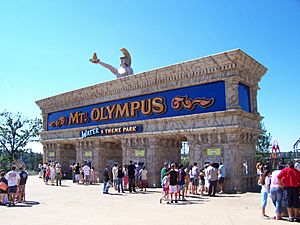 Mt. Olympus was started by the Laskaris family. Demetrios “Jim” Laskaris was born in Katsaros, Greece and immigrated to the United States at the age of 13. He received a technical degree in Michigan, served for four years in the U.S. Navy, and then owned and operated several restaurants in Chicago. The family moved to Wisconsin Dells, where Jim and his wife Fotoula opened a hot dog stand in 1970, which they named “Big Chief”, after a statue purchased from a trade show. The hot dog stand was a commercial failure, and the Laskaris family was nearly forced to return to Chicago. At the last minute, they found $700 in savings inside a sock, which they invested in a three-wheeler dirt track.

The family expanded on their property by building a 7-unit motel, and in 1975 they added a go-kart track, "Goofy Karts", along the Wisconsin Dells Parkway. Nick Laskaris, Jim and Fotoula’s son, became the go-karts' chief mechanic at the age of 9. Between 1978 & 1982, the family's business ventures continued as they opened a campground, trailer court, and began running country-western and Native American ceremony shows. When the lease on the go-kart track ran out in 1980, “Goofy Karts” was abandoned and a new cloverleaf track was built next to the Big Chief hot dog stand. It was also at this location that Nick Laskaris started constructing his own go-karts a few years later.

Nick Laskaris became involved in the design and engineering of the various go-kart tracks on the property, which included the only multi-level go-kart tracks in the world. Big Chief Go-Kart World, as it was then known, developed new techniques for elevated go-kart tracks, which have now become standard. The family purchased several acres along the Wisconsin Dells Parkway, commonly known as the "Strip", and continued the park's expansion. In 1995, the park added the first roller coaster in the Wisconsin Dells, Cyclops, and changed its name to Big Chief Karts & Coasters. Another roller coaster, Pegasus, was added the following year and Zeus opened in 1997. The park acquired Crazy King Ludwig's Adventure Park, which featured its own go-kart track, in 1999. This purchase brought Big Chief's to a total area of 107 acres.

Big Chief Karts and Coasters was renamed to Big Chief's Mt. Olympus Theme Park in 2004 and the park expanded its Greco-Roman theming. Later that year, Mt. Olympus entered into a partnership with the Mattei family, owners of the nearby Treasure Island Resort. This partnership merged Treasure Island's outdoor Family Land Waterpark and the Bay of Dreams indoor water park with the Mt. Olympus theme park, creating a co-owned complex known as the Mt. Olympus Water and Theme Park. These two parks were not physically connected at the time of the merger because the Playday Motel separated them, leading Mt. Olympus to purchase the Playday Motel and demolish it.

On March 15, 2007, Mt. Olympus acquired Treasure Island entirely from the Mattei family. The purchase also included Pleasant View Motel, which became "Mykonos Village", and the Captain's Quarters, a family-oriented hotel building which was sold to Bluegreen Resorts and now operates as "Bluegreen Odyssey Dells", attached to the Hotel Rome (formerly the Treasure Island Resort). With the acquisition from the Mattei family, Mt. Olympus added 60 acres (240,000 m2) of real estate to their property, bringing the total area to 156 acres (0.6 km2).

The Lost City of Atlantis, a three-acre outdoor water park area, opened in 2012. Atlantis features seven new slides, a monster dump bucket and a 120' geyser, built at a cost of $3.5 million.

Hades received a major renovation in 2013, adding a 360-degree inversion and the coaster was renamed Hades 360. "The Manticore", a vertical swing ride, was added to the park in 2015. "The Great Pool of Delphi", a 27,000 square foot swimming pool containing 500,000 gallons of water, was added in 2016. The pool was advertised as the largest swimming pool in Wisconsin Dells, the "waterpark capital of the world". The cost of this addition was $4 million.

Acquisitions of other properties

The Copa Cabana Resort Hotel & Suite was completely renovated after it was purchased by Mt. Olympus in 2011, and it reopened as the core of "Mt. Olympus Village" the following spring. All of the resort's acquired motels were rebranded once again to Mt. Olympus Village in 2013. This change coincided with the purchases of the Concord Inn and the Monaco Motel. The addition of these properties gave the resort a total of over 1,300 rooms. Recent acquisitions include the Diamond Hotel in 2015 and the Ambers Resort and Conference Center in 2016.

Zeus' Playground is the outdoor theme park section at Mt. Olympus. It consists of go-karts, roller coasters and a few other rides. 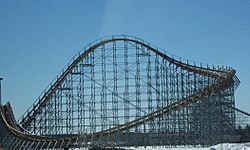 Hades Rollercoaster at Mt. Olympus, which has the world's longest underground tunnel on a roller coaster. This section of the ride has since been modified with a barrel roll and overbanked turn. 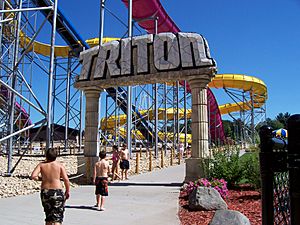 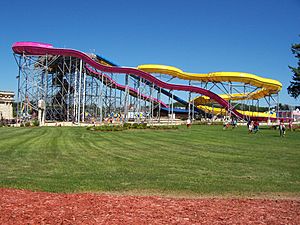 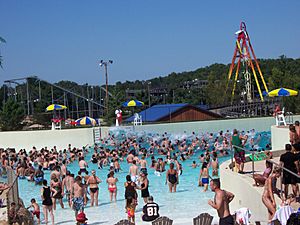 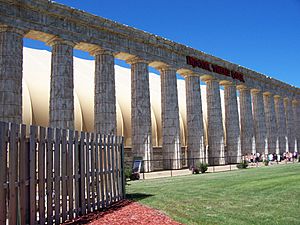 The Parthenon is the Dells' first indoor theme park. The columns are made out of styrofoam. 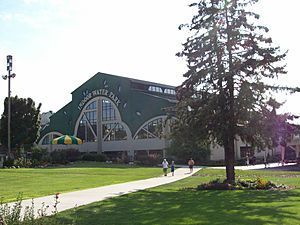 The side of the indoor waterpark building

Night at the Theme Park

In the summer of 2009, Mt. Olympus began Night at the Theme Park, where select rides (Hades 360, Poseidon's Rage, Zeus, Trojan Horse Go-Kart Track, Underworld Go-Kart Track, and the Kiddie Land Rides) would be open from 10 pm to 1 am for four nights weekly. People who would attend would receive free soda and parking. Nick Laskaris got the idea when he took his children to go see Night at the Museum: Battle of the Smithsonian at the local cinema. The village of Lake Delton did not approve the event, because it was in violation of its amusement ordinance in which businesses have to close around midnight and their 11 pm curfew law. Village trustees were worried about someone crossing the busy Wisconsin Dells Parkway at night and getting hit by a car. The village of Lake Delton subsequently made some changes to the amusement ordinance, with a variance for businesses if they requested, including Mt. Olympus. The village board had these changes on hold.