Mudgee residents made representations during the planning of the Great Western Railway to have the line built from Newcastle to Singleton and on to Mudgee. Bathurst, however, was successful in having the line extended from Penrith, which was completed in 1876.

The residents of Mudgee continued to lobby for their own line and formed a committee in 1870 to advance their cause. In 1873 the Government of New South Wales proposed a line between Kelso and Mudgee, but when nothing happened, residents formed the Mudgee Railway league in 1875. Small progress was made in 1876, when a survey was undertaken, but work did not progress until 1879 when Parliament voted for the construction of a line between Wallerwang and Mudgee. This bill was mainly due to the efforts of Sir John Robertson, member for Mudgee and Chairman of the Mudgee Railway League. Sir John was honoured for his efforts, turning the first sod for the line on 23 September 1880.

The line, however, was not officially opened until 11 September 1884. Extravagant celebrations marked the opening of the line, beginning with the arrival of the decorated mail train on the morning of the 10 September. This was followed by a picnic at Market Square, now Robertson Park. The official opening followed on the 11th with a procession of bands through the streets to the station where the ministerial train broke the ribbon. Celebrations continued at Market Square with an outdoor feast and a banquet and ball in the evening. Sheedy (1988:15) states that the opening of the railway "was the climax of one of the greatest days in the history of Mudgee and saw the realization of nearly 25 years hard and persistent representation by the citizens for "their" railway."

The station building was designed by John Whitton, Engineer and built according to his plan. Whitton seems to have realised the importance of the railway to people of Mudgee and created a building in scale and grandeur that was only surpassed by the Devonshire Street Terminus and the station buildings in Newcastle, Albury and Hay.

The yard layout has not altered greatly since 1883, although the Station Master's Residence, Railway Institute, Signal's and Examiner's Cabins and Garages have been demolished.

Passenger train services to Mudgee ceased in 1985. The station building was used for some years as FreightCorp and Pacific National accommodation and leased by community groups. Much of the interior of the building was converted into a restaurant in 2005, with alterations to the general waiting room, entrance/lobby and booking office, the installation of kitchen facilities and temporary fencing on the station platform. The restaurant opened in February 2006. It was later replaced by an Indian restaurant; however, this ceased operation c. 2015.

It is now used by the Mandurah Studio Craft Co-operative, the Arts and Crafts Mudgee gallery and as a veterans' drop-in centre run by the Mudgee sub-branch of the Vietnam Veterans Peacekeepers and Peacemakers Association. 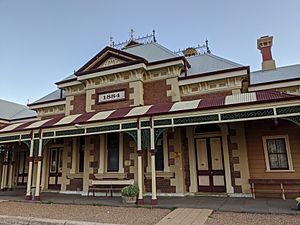 The yard runs east-west in an elongated form matching the railway line. It terminates at the eastern end with a concrete overbridge. To the west of the station building is the foot warming furnace and coal bins, which have been roofed. The Station is surrounded by a gravelled parking area and nature strip to the north, by the goods yard to the east, which includes the dock, crane, weighbridge and office. Further east is the Engine Running Shed and associated buildings. A range of residences and the Barracks line Inglis Street. To the south of the Station, and across the tracks, is a park-like area leased to the Mudgee Base Hospital.

The Station is a break fronted building of red brick with sandstone foundations and quoins. A massing of roof structure in the centre of the building provides a focus, being decorated with cast iron finials and crestings. A date plaque sits underneath this central moulded pediment. The roof is hipped corrugated iron with ridge vents and is also broken by elaborately moulded chimneys. A band of painted renderwork decorates the exterior at cornice level. Wings at either end of the building form the termination of the cast iron verandah on the Inglis Street face, while facing the tracks an elaborate awning runs the length of the building. Pavilions at either end of the Station were once free standing, but have been linked by later infill.

Internally, a sense of space is created by the use of high ceilings. The walls are plastered and many rooms retain their hardwood floors. Externally the windows and fanlights have arched heads, but internally are finished horizontally with squared architraves. One room appears to have retained its original chimney piece, but all other fixtures have been removed.

Mudgee station and yard group is one of the best surviving Victorian station and yard groups in which most of the components are intact with major structures surviving from the time of opening and from early in the 1900s. It exhibits the confidence in railway construction in the 1880s and the continuation of that confidence by the quality of the extensions to the station building in 1913 when most railway buildings were standardised and of cheaper construction. It is one of the very few similar buildings to survive without exterior masonry being painted. The station building, although added to, retains its early form and is a major civic building in Mudgee. It marks an important phase in railway construction at the end of the boom period, following the goldrushes to western NSW.

Mudgee railway station was listed on the New South Wales State Heritage Register on 2 April 1999 having satisfied the following criteria.

The Mudgee Railway Station is of State significance as a fine example of a Victorian boom style railway station.

The Railway Station is of local significance as a town landmark.

The Mudgee Railway Station and yard are of State significance as a rare surviving example of original railway line and siding arrangements. The Railway Station is rare in the degree and extent to which it retains its original fabric and character.

The Mudgee Railway Station and yard are of State significance as being representative of large country railway stations erected in the late Victorian period. It is a fine example of its type due to its integrity and the retention of original fabric, particularly in relation to the layout of the rails and sidings.

All content from Kiddle encyclopedia articles (including the article images and facts) can be freely used under Attribution-ShareAlike license, unless stated otherwise. Cite this article:
Mudgee railway station Facts for Kids. Kiddle Encyclopedia.